I'll Tell You Exactly How I Increased My Rating +100 Points in Just 9 Days...

In our 100% FREE Chessily Bootcamp, I'll help you get your chess to the next level – no matter your starting point!

The knight is a unique piece in chess. It has a very special way of moving across the board, as well as the ability to jump over other pieces 🦘. So, let’s do a deep-dive into the knight!

Position of the Knights on the Board

In total, there are four nights on the board at the beginning of a game. The two white knights start the game on b1 and g1, while the two black knights begin on b8 and g8, respectively. See this diagram for the knights starting position in chess: 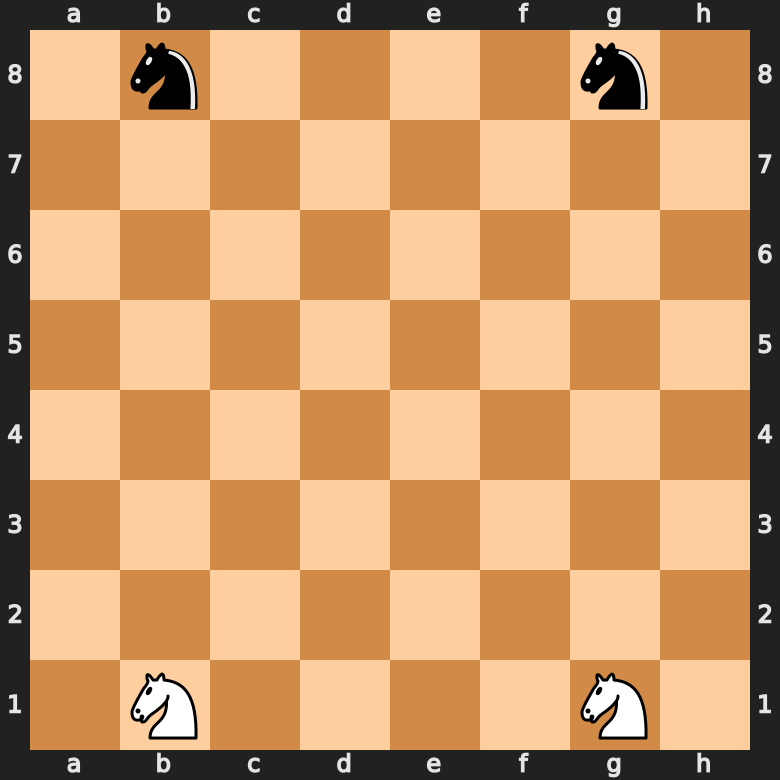 A common beginner mistake is to swap bishops and knights in the starting position. Make sure your knights are always directly besides your rooks, which always occupy the corner-squares.

How the Knight Moves in Chess

As we have already alluded to, the knight has a unique way of moving across the chess board.

A relatively easy way to remember the knight’s movement, is to remember the distinct “L”-pattern it moves in. Two squares vertically and one horizontally (or the other way around).

General Information on the Knight

The knight is considered a minor piece, alongside the bishop. In chess notation, the knight is indicated with the letter N.

Value of the Knight

The knight has a value of roughly 3 pawns. In theory, that makes the knight and bishop worth about the same. However, there are certain positions where the knight excels. In closed positions, the knight is able to jump over blockades, whereas the bishop might be blocked in by a rigid pawn structure, rendering it almost useless.

Generally, you want to have the knight as close to the center as possible, where it has the most potential moves. The knight is weakest in corners and the edge of the board, where its movement is restricted the most 👎.

In the center of the board the knight has eight potential squares it can move to, while it only has two squares when in the corner of the board. A good saying to remember is “knights on the rim are dim” 🔅.

Knights can be especially powerful in so-called “outposts”, where they can’t easily be pushed away from:

The knight on d5 has an excellent outpost, dead in the middle of the board. It can never realistically be pushed away, as no pawns can directly attack it. Due to its centered position is attacks eight squares in total.

Often, knights with a strong outpost can be worth about the same as a rook, depending on the position.

Forking with a Knight

A common theme in chess is a knight fork. A fork is a tactic in which a piece attacks at least two enemy pieces at the same time. Since the knight cannot be captured by pieces it is attacking (except by other knights of course), their forks are usually devastating. Have a look at this example:

The white Knight on f6 attacks both rook and king. Since black is forced to defend the check, the knight can easily capture the black rook on h7, winning the game for white.

The two knights endgame is a special type of endgame in chess, in which two knights with their king play against a lone enemy king. While a checkmate with a king and two knights is theoretically posible, the checkmate cannot be forced. That means the opponent needs to play suboptimally (i.e. blunder) to get checkmated.

Paradoxically, it is often possible for two knights and a king to force a checkmate, when the opponent has a few pawns left, as they can be used to prevent a stalemate while checkmating.

Another situation where the knight can play a critical role is in a pawn promotion. There are some positions in which it can be beneficial to underpromote a pawn into a knight, rather than a queen or rook:

3 Tips for Getting the Most Out of Your Knights

Further Reads About the Knight in Chess

Hi there, I am Marc Cressac!
I’ve been an avid chess player (and recently publisher) for more than 20 years by now! On Chessily, I try to help beginners checkmate their way to mastery!
Learn more about me and Chessily.

I'll Tell You Exactly How I Increased My Rating +100 Points in Just 9 Days...

In our 100% FREE Chessily Bootcamp, I'll help you get your chess to the next level – no matter your starting point!

Chessily is your go-to ressource for learning all about the beautiful game of chess.
Learn more: About.

Manage Cookie Consent
To provide the best experiences, we use technologies like cookies to store and/or access device information. Consenting to these technologies will allow us to process data such as browsing behaviour or unique IDs on this site. Not consenting or withdrawing consent, may adversely affect certain features and functions.
Manage options Manage services Manage vendors Read more about these purposes
View preferences
{title} {title} {title}